As far as post production goes, it did not take many days to edit, over all it took two full days to Finnish editing. I was present and contributed to the entire first day and after that the editor and I had a conversation about what we would see for the rest of the process. Because we were able to finish editing in such a small amount of time my personal involvement on post production was only the one day. 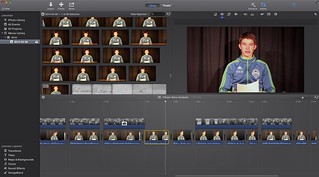 – This is an example of some contribution to editing I had. Personally I figured out what needed to be done for color correction and shot cut sequences.

As a group we tried two different shooting styles and did four takes so we never had to do any re-shooting because we had so much back up footage to chose from.

How I could have Improved the film

I could have improved this film by being more creative and freethinking with some of the angles and the location. I also think this could have been better if I had attempted to do more difficult things with my Cinematography. For this project I tended to play it safe and stay inside my comfort zone. If I and pushed my self a little more I believe that the outcome would have yield better results.

I learned overall, that if I continue to push my self and press the boundaries of my ability’s I will continue to grow and progress as a filmmaker. I also learned that you need to budget a lot of time for pre-production and really plan out everything so the rest of the process goes much smoother.